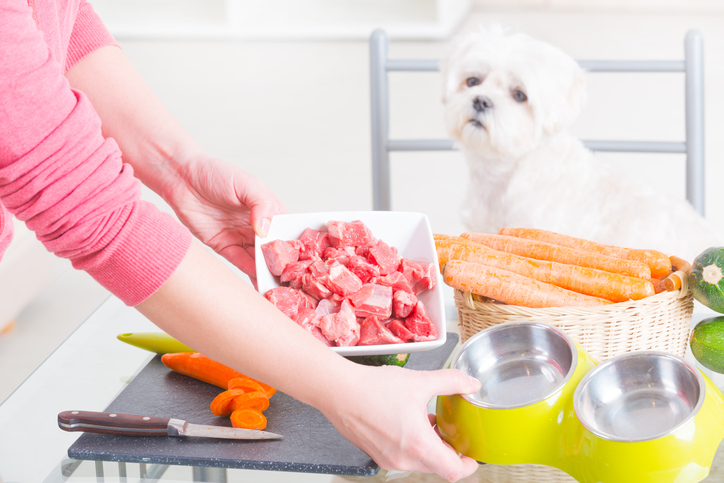 Raw-meat pet food has become increasingly popular in recent years, based on claims that such diets are more natural and healthy for dogs and cats.

However, there are questions over the health claims about raw meat, and now new research has found that many raw-meat dog foods contain high levels of bacteria that pose a risk to animals and humans.

All 60 samples contained Enterobacteriaceae species, indicating faecal contamination. Levels varied, but more than half of the products contained levels that exceeded the maximum threshold under European Union regulations.

One third of the samples contained E.Coli and 7% contained Salmonella, both of which are capable of passing from animals to people and causing infections.

The researchers warned that the bacteria could transfer through contact between pet and owner. Bacteria in raw juices can also splash and spread to surfaces and other food in the kitchen.

Anyone feeding raw meat to their pet should keep it frozen until use, and then thaw it at a maximum of 10 degrees Celsius.

The food should be handled separately from human food, with separate kitchen equipment (or the same equipment washed thoroughly after use).

Don't let your dog lick you after it has just eaten raw meat.

In families with infants, elderly people or immunocompromised individuals, dogs should not be fed raw meat.

Daniella Dos Santos, from the British Veterinary Association, told BBC News: "Pet owners who choose to feed a raw food diet should be aware of the potential health risks and take full precautions while storing and handling the food.

"BVA would also not recommend making a raw food diet at home without veterinary guidance due to the potential for nutritional deficiencies in homemade diets.

"We would advise any owner wanting to try a raw meat-based diet for their pet to first consult a veterinary surgeon."